Disclaimer- This is not exactly a review, but more of my experience while watching Queen... If you want a review, well you gonna have to purchase a ticket and go watch the movie~~!

There I was sitting with 2 friends on one side and a guy on the other side who'd come with his girfriend [ how do I know, cos she told someone on the phone that she was at the movie with her boyfriend, yes she spelt it out.. lol]...  Anyways, we had reached our seats just as the movie was beginning, and it was the Mehndi scene. London thumakda song was just starting as we got comfortable.... Rani's[Kangana] mind voice was running with various dialogues about "how pretty the sign that said Rani weds vijay was, and how her mom had said she was going to change into a saree but hadnt, and her brother Chintu had her phone to take pictures so she could upload them on facebook but he was missing and finally about how Vijay had changed since his London sojourn] And then as the movie progressed, the Cafe coffee day scene had the people on either side gasping and the guy on my right even uttered a swear word [ How the eff can he do that to her, he has changed but she hasnt he says.. bleddy @#%#% were his exact words before the girl shushed him]... 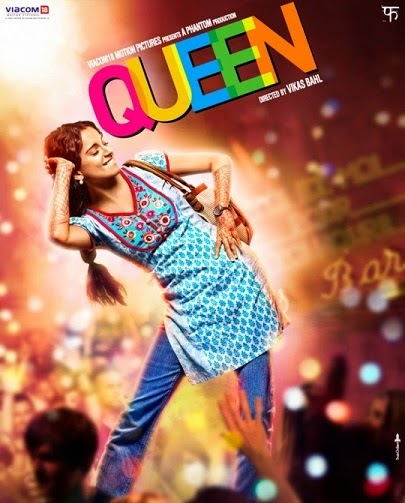 As the movie progressed, I noticed most people in the theater were quite silent, either contemplating Rani move- whether she would go ahead with her Paris- Amsterdam trip or succumb and resume normal boring life... There were a few who clapped aloud when she announces at the dining table her decision to go on her honeymoon alone... There were about 3 elderly North indian women in the row behind who said "acchi baat hui" [this is a good thing] when she hops on the flight and zooms away to Paris.

Later on, as Rani checks into her room, and hears a sudden sound, the guy next to me couldnt control his chuckles, and the girl chimed in as well.. And thn when Rani goes to the balcony and sees Vijayalakshmi (Lisa Haydon) was the 1st time, there was a gasp in the theater- mainly for what she was wearing... This very audience laughed their brains out when Rani makes those  kissy faces before kissing the hot Italian crush after the Sailing boat food challenge scene...

And when Vijay [Rajkummar Rao] is constantly calling her, telling her he loves her, one of the elderly women actually muttered " nahin jao, chod do use" [dont go, leave him]. Heck, I was amazed at the audiece and how involved they were with the movie. When in Amsterdam, Rani goes to the room and discovers 2 guys already there, the guy next to me "woah, is that what a hostel is like?" and another lady behind me said "haan, my son no told me this is how he stayed when he went to Europe for a holiday], the man next to her said "Amsterdam is such a beautiful country, mazaa aaya"... ;)

Everytime Vijay made an attempt to reconnect with her, and the scene where she asks him to come to a cafe [after telling her roommate/friends that she cant make it to the concert], the entire hall was up in claps when the waiter brings her mint tea, addresses her by name and she swavely just shrugs off Vijay and heads off to the concert. My friends and the guy on other side commented [Vijay looks like a monkey, such a loser]

The women laughed when Vijaylakshmi gave Rani a makeover,  including grabbing her boobs and her ass... The guys enjoyed the scene when they go to Sex store and Rani buys gifts for her families without realising what they were.  It was a howlarious moment when during the initial scenes Rani pours her heart out to everyone at the bar and then suddenly is alert on hearing a hindi tune.

It was amazing to see the entire audience [ across ages] react, and be so completely tuned in to Rani and her actions~!!
Chistled by Aarti at Monday, March 24, 2014 1 comment:


This was such an epic moment when ellen rounded up quite a few actors and did this selfie..

To read more about the Oscars, visit the website